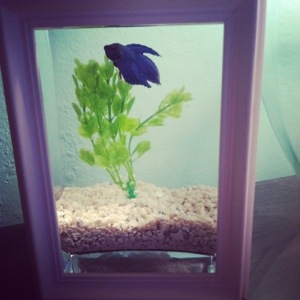 One of my favorite DIY blogs, Glitter ‘N Glue, posted a framed betta fish home that I actually re-blogged a few months ago.  I had been wanting to get myself a little guy, so I finally did!  I have had fish before, actually a few bettas that were eaten by my cat fishing them out of the tank (seriously, that happens!) But since there are no other pets at my place, I figured he would be safe.

Watching fish are supposed to relieve stress so I probably should have done this awhile ago!  It is really easy to do, the hardest part is finding the correct sized glass vase and frame to go with it.  I looked at a bunch of random stores and then ended up at Michael’s craft store.  I found a tall-ish vase and a white frame that lined up perfectly!

What you will need:

Take apart your frame so just the frame itself is left with no metal parts attached.  Glue your frame to your vase and wait until it is completely dry.  Add your rocks and plant, and then fill 3/4 with filtered water that is the same temp as the one your little guy is waiting in.  Dump him into to tank and watch him enjoy his new home!

CAUTION:  These guys jump!  Yes, jump.  Up to three inches, Google told me after it was too late.  My pretty little home looked great, but he must have been freaking out because when I woke up, he was gone.  Not kidding.  Had to go back to the pet store (pretending I wanted another one…) and replace the poor thing.  This time, I put the frame glass over the top.  No, it doesn’t look AS cute, but you barely can notice.  It was an accident, okay?

PS: I named his one Herman. RIP to Tony who was only in here for about 12 hours