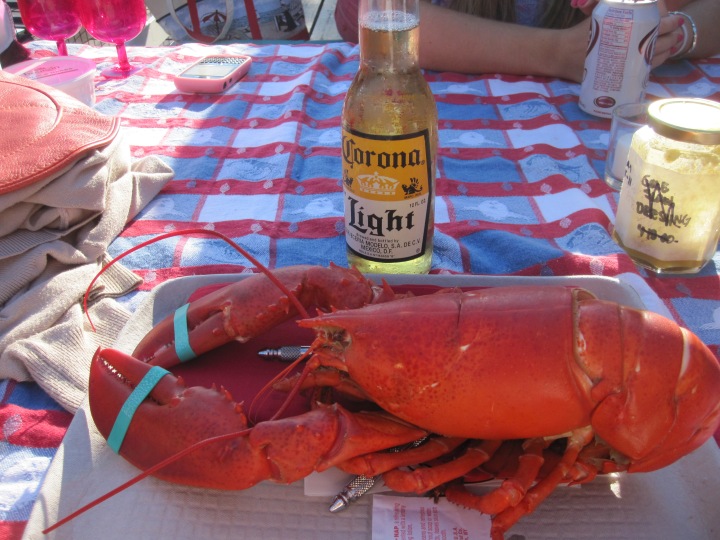 So as you may or may not know, I am from New England.  I grew up there and was fortunate to live right on the water.  My dad, who has been on boats his whole life, obtained a five trap lobster license a few years back.  We would take the dinghy, Mudbug, out and pull the traps every few days which allowed us to feast in lobsters on a weekly basis.  I also worked at the Old Ferry Landing for most of my life which sold fresh “bugs.”  On multiple occasions I had to show tourists the best way to attack these bad boys.  Do you know how many times I had to bus a table that had claws filled with meat because people are clueless?  Heartbreaking!!  My dad has shipped me live lobsters twice since I have been out here so that I could get a little taste of home (though last time the shipping was through the roof so it may have been the last).  As one can see, I have been around these crustaceans all of my life, and I guess that makes me spoiled by the convenience.

Being out in California and hearing about “lobster,” makes me laugh.  Over a year ago I went to a Mexican restaurant, El Zarape, that was supposed to have the “best lobster burrito ever.”  I could barely choke a few bites down before I turned to my go-to chicken tacos instead.  Since then, I have avoided lobster at all restaurants in San Diego.  (I lied, I did have a lobster BLT @ Tower23 Hotel which was amazing, but besides that, no thanks.)  Today I went to Pacific Beach Fish Shop by my house with my best friend and roommate, Jenn, and after speaking with some co-workers earlier that day, I decided I would try to the lobster tacos.  They were decent, but it tasted more like shrimp than lobster.  THIS IS NOT REAL LOBSTER PEOPLE!  If I ever order lobster again out here, I need to prepare ahead of time for disappointment and just assume that it will taste more like shrimp than the tender morsels I am used to.  West coast peeps are really missing out on that fresh seafood that New England is famous for. 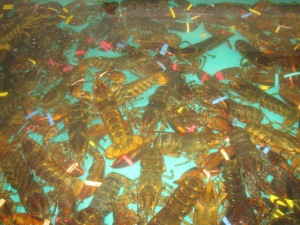